Technical Description of the Broadway Organ

(Note: This description was prepared for the 2007 convention of the Organ Historical Society. The Broadway organ was the featured instrument for the opening concert of that convention.) 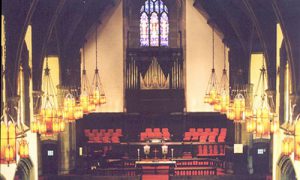 The tonal design of the sanctuary organ includes a very complete tonal palette, with a full chorus of Principals from 8’ through mixture in each division. In the Swell and Choir divisions, we were able to utilize Principal pipes from the previous organ, completely reconditioning and revoicing these pipes. Throughout the organ, we used variable scaling, allowing us to taper the tone and speech of each rank to both the acoustical needs of the room and the needs of the tonal architecture of the instrument.

Built of 70% tin, the Great Principals are placed in the room on a cantilevered chest over the heads of the choir. A high tin content was selected for these pipes to give the Great a bright, singing quality. The pipes on this chest are arranged in a major 3rd layout. The 8’ Principal in the Great division is based on a scale of 155.5 mm at 8’ C.

The Great flutes and a Gemshorn are located in the central chamber, directly behind the exposed Principals. The division has both stopped and open flutes at 8’ pitch, as well as a tapered Spillflöte. The 8’ Flute Harmonic uses a complex variable scale, based on a similar stop by E.M. Skinner. The Great division is voiced on 3.5” wind pressure.

Located in the right-hand chamber, the Swell division is comprised of 18 ranks of pipes. The Principal chorus is based on the 8’ Geigen Principal, a rank from the old organ that was retained and revoiced. The chorus includes a Principal at 4’, and a III-IV rank Plein Jeu pitched at 2’. Since the 2’ stop in the Swell is a Flautino, the mixture is designed to carry the 2’ rank throughout its entire compass, hence the addition of the extra rank at the top of the stop.

The Swell also includes two period flutes, an 8’ Holzgedeckt that dates from about 1890, and a 4’ Flauto Traverso, dating from 1925. Both of these ranks were carefully reconditioned and revoiced. The division also includes 2 2/3’ and 1 3/5’ mutation stops that can be drawn together to provide a Cornet combination.

The Swell division contains two strings, each with a matching celeste. The Viol is a relatively strong presence that can be heard in Romantic registrational buildups. The smaller, tapered Erzähler is a cross between string and flute sound, and offers a more gentle sonority.

The Swell reed battery includes an 85 note Fagotto and an 8’ Trompette. We made the decision to use a unit rank for the 16’, 8’ and 4’ Hautbois/Fagotto for reasons of space and expense. The full-length 16’ serves both in the Swell and Pedal. Played at 4’ as an Hautbois Clarion, the stop provides the Clarion presence, bright but not overpowering. Again, the scales and voicing specifics of this stop were carefully planned. The Trompette is a rank originally built by Giesecke that had been added (rather unsuccessfully) to the old organ. The pipes of this rank were revoiced with new parallel shallots and tongues. The pressure for the Swell reeds, as well as the Erzahler and Erzahler Celeste, is set at 6”, to give them both power and depth.

The Choir is based on an 8’ English Diapason. This slotted principal was the 8’ Great Principal in the previous organ. Although the pipes were underscaled for the Great chorus, their design, with considerable revoicing, is appropriate to the Choir division, yielding a Principal sound that is somewhat darker in tone than that of the Great. The Choir Principal chorus is completed by ranks at 4’, 2’, and a III rank mixture at 1’. The mixtures in each of the three manual divisions were designed to break at different points in the compass.

The flutes in the Choir include an 8’ metal Gedeckt and 4’ Koppelflöte. A period (1925) Flauto Dolce and Dolce Celeste, consisting of open wood pipes, gives a warm flute celeste sound to the division. Lacking the power and articulation of the Gedeckt, the Flauto Dolce is also a useful alternative flute sound for quieter or warmer registrations.

A new Clarinet is also included in the Choir. The sound of this rank makes it suitable for use either as a solo sound, or in combination registrations that call for the presence of a Krummhorn.

The choir division is voiced on 3” wind pressure.

In the tonal design of the sanctuary organ, we felt that a reed stop was needed that would be a commanding presence, even in combination with the full organ. The result is the Bombarde, which plays at 8’ in the Choir and Great, and at 16’ in the Pedal.

This Tuba stop was originally built by the Hall Organ Company in 1930. In our recreation of the stop, the scales were adjusted, and Harmonic resonators extended downward to 2’ C. A new 16’ full-length extension was constructed, and the entire stop provided with new parallel shallots. The stop has its own supercharged blower and is voiced on 13” wind pressure.

The Bombarde blends well with the full-organ sound but can be used as a solo against the ensemble. It can also be used as a fanfare reed. Because of its scale and wind pressure, the Bombarde has a broad and powerful tone. It is the perfect “glory reed” for the Broadway instrument – an organ that blends both classic and Romantic sonorities.

The Pedal division includes five 16’ flue ranks, giving the organist a wide range of tone colors and intensities. Together with the reed stops, the organ includes five full-length 16’ stops. Principals in the Pedal division are pitched from 16’ through a 2 2/3’ Mixture of IV ranks. The 8’ Octave and 4’ Choral Bass are also located in the sanctuary on the cantilevered chests. One useful addition to the organ is a 16’ Open Diapason, also by the Hall Organ Company. This wooden rank adds depth and gravity to the 16’ ensemble. The 32’ Untersatz is an acoustic bass (resultant) using notes of the 16’ Diapason for the fundamental and the Pedal Bourdon for the quint.

The pipework is planted on windchests of two different types. The Swell and Choir main windchests are pallet and slider chests with electropneumatic Blackinton-style pallets. These chests provide cohesion to the ensemble, and are mechanically simple and therefore easy to maintain. All the windchests are built of solid hardwood.

The chests of the Great division, together with some of the offset chests, are electromechanical chests, provided with channeled toeboards that place a baffle space between the valve and the pipe. This channel provides a steady wind supply that is free of turbulence to the pipe, resulting in better pipe speech and more effective voicing. Using electromechanical actions in these chests allowed a freedom of layout and a compactness that were necessary for the cantilevered pipes.

In the interests of economy, and to provide a look that is consistent with the architecture of the building, we decided to use an existing console cabinet that, except for the original ivory covered keyboards, was completely refitted with new interior wood appointments of solid walnut, as well as new controls and systems.

To manage the organ, we selected Peterson’s new ICS4000 integrated control system. This system offers flexibility and programmability, as well as full MIDI capabilities. The system includes 100 combination action levels, piston sequencer, programmable crescendo, and four different tutti combinations. The system can be reprogrammed on site to accommodate additions or changes to the organ. The console is connected to the organ by a single CAT-5 cable.

The console and the individual divisions each have their own power supplies, with voltages optimized for the specific needs of the actions in those divisions.

The oak furniture surrounding the cantilevered division was designed and built in our shop. The furniture was designed to incorporate the simple lines and deep wood colors of the Broadway sanctuary. The design of the organ was planned to compliment this magnificent room, and to look as though it had always been a permanent part of the church.