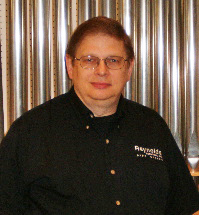 Despite a family history of over a century in the world of music retailing, the path to the pipe organ business for Thad Reynolds actually led through the church by way of a gymnasium.

Inspired by the grand sound of his church’s pipe organ, he became an organ student of Martha Dougherty. Under her tutelage, he learned not only the techniques of playing the organ, but also an understanding of the importance of music in carrying the message of the church. To Martha, music in the church was not just an occupation, it was a high and urgent calling, and great music was perhaps God’s highest gift. Later, at Ball State University, he continued his organ studies with Fred Binckes and Kirby Koriath.  Each of these fine teachers offered something special.  Binckes offered a great wit and a broad appreciation of the diversity of organs and organ music, especially the American orchestral organ.  Koriath encouraged his interest in organ-building, and guided him through his first project.

Thad was a church organist.  But his interest in how the pipe organ worked, and how it produced its music held a fascination for him equal with that of playing. While a college student, he sought out and cataloged dozens of pipe organs of different styles and by various builders, learning to appreciate each instrument for its own unique qualities.  During this time, he also learned of the fascinating oddities that enrich the American organ.  For instance, he encountered a nice string voice on an ancient Austin organ.  The stop tab was marked “Nitsua” – Austin spelled backwards!

His first major project happened nearly four decades ago, when he single-handedly brought the municipal organ in Marion, IN back to life after more than a decade of neglect and silence. The effort required nine months of work (and the expenditure of $28 – a lot of money to a college kid), but finally the magnificent three-manual Estey organ once again reverberated in Memorial Coliseum. There it remained playable for another thirty years, until a building remodeling silenced it. (The organ remains, and Thad is determined to resurrect it again.)  This project marked the start of what would become Reynolds Associates.

Following college, Thad Reynolds developed both his organ building and business skills. For twenty years, he was a church organist and choir director. During this time, his organ business expanded as the client list grew. These congregations learned that they could depend on him to provide careful and professional service, as well as on his personal and business integrity. As an Operations Manager for Sears, Roebuck, and Company, he learned the business skills that are necessary for any successful firm. Perhaps the most important lesson from the Sears days: “Take care of the customer.”

Thad Reynolds is a member of the American Institute of Organbuilders, the American Guild of Organists, and the Organ Historical Society. He has participated in many workshops and master classes on virtually all aspects of the art and business of organ building, and has also sponsored and provided workshops for his clients.

Thad is the author of two books, The Harmonious Echo: The Life and Times of the Barley Memorial Organ, and Consider the Rock: An American Family. Both books are available by contacting Thad at reyassoc@reynoldsorgans.com or from Amazon.com.