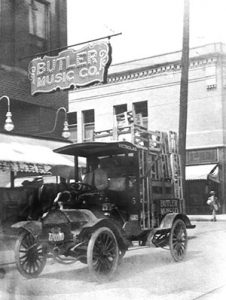 Reynolds Associates is a company that began nearly forty years ago, with the renovation of a municipal pipe organ in Marion, IN.

But the story actually begins long before that.

Thad and David Reynolds are the latest businessmen in a family whose entrepreneurial interests have centered on musical instruments for over 120 years. Thad’s great-grandfather, Thad Butler, manufactured pianos and parlor reed organs in central Indiana before the turn of the twentieth century.

In his twenties, he started Indiana’s most successful carriage factory. In his thirties, he had transitioned to the real estate business during east central Indiana’s gas boom. By the age of forty, he had become a retailer, first selling bicycles, and finally settling on musical instruments. The firm he founded, the Butler Music Company, became a business institution in central Indiana for nearly a century. 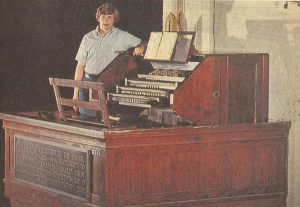 Thad Butler’s son, Edwin (Thad’s grandfather) was President of the National Association of Music Merchants (NAMM), early in the twentieth century, and under him the business flourished, winning many national awards. Exposed to this family of musicians and music merchants, it was probably inevitable that Thad Butler Reynolds would be drawn to the world of music.

Young Thad’s first project – his baptism of fire – happened while he was still a student at Ball State University, when he tackled the restoration of the C.G. Barley Memorial Organ in Marion’s Memorial Coliseum. This magnificent three-manual Estey organ (#2727) had been silent for over a decade because the cost to repair it had been estimated at $75,000. It took Thad nearly a year of volunteer time to get the old instrument playing again, at a total cost of $28. 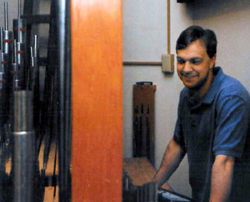 Following newspaper and television reports in the local and Indianapolis media, his new business was launched, slowly at first, but with ever-increasing momentum. By the way, the Coliseum organ continued to play for thirty years (on its original leather!), until the building was remodeled and repurposed. But the great organ is still there, waiting for Thad and David to renew it again!

By the time David Reynolds was old enough to hold a screwdriver, it was clear that he, too, would be a talented organ builder. Eventually, the father and son team became a business partnership.