A New Pipe Organ for FUMC, Wabash, IN

Wabash Indiana is a busy town!

This small city, which is only about 18 miles north of our shop, has been busily reinventing itself for nearly ten years.  The efforts of the townspeople have paid off, turning Wabash from a sleepy little river town into a bustling center for shopping, manufacturing, and entertainment.  Economically, the town is fortunate to be anchored by two companies that feel a strong civic responsibility.  As plumbing moved indoors, opportunities came fast in the industry. Edwin Ford founded the Ford Meter Box Company, which pioneered the familiar water meter boxes found along many city streets. Meanwhile, Mark C. Honeywell started a company that allowed home owners to regulate the temperature in their homes. Today, the Honeywell corporation employs over 100,000 people and has annual revenues of over $40 billion.

Both these men were Wabash natives, and the companies they founded continue to support the community. The Honeywell Center, in the heart of the city, is one of Indiana's finest cultural centers.

The previous layout of the pipes (right) was nearly impossible to service, and put the pipes of the Great division in an acoutical shadow. Our new layout (left) takes advantage of the vertical space behind the organ case. The Choir division (intended for accompaniment of singers in this organ) is at the bottom. The Swell division is in the center, and the Great sings out from the top.

Just up the street from the Honeywell Center is First United Methodist Church, one of Wabash's oldest. Their building houses a vital, vibrant congregation.  As they approached the renovation of their facility, the church contacted Reynolds Associates about their pipe organ.

The original pipe organ in the church was built by William King and Son and housed in a truly magnificent Walnut case. This tracker organ was rebuilt in the 1950s by Earl Bielhartz of Lima, Ohio.  Mr. Bielhartz retained many of the original pipes, but electrified the organ and added a third manual. This instrument served the congregation for nearly sixty years, but by the time other parts of the church were needing renovation, the organ too was feeling its age.

One problem was that many of its problems were difficult or impossible to repair.  The Bielhartz design for the organ made access to many of the mechanisms impossible without removing large portions of the organ.  Even routine tuning was very difficult. In addition, the internal arrangement of the pipes, chests, and swell boxes caused acoustic shadows making the balance of sounds different depending on the location of the listener. Typical of the transitional tonal designs of the time, the "new" sounds of this instrument did not blend effectively with King's original pipes.

Designing the new organ for First Church was a challenge.  The main part of the new organ needed to fit in the same space behind the organ case. The church needed a more versatile and complete organ as well. 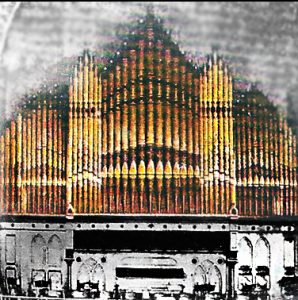 Our plan for the new organ takes advantage of the vertical space available behind the venerable facade.  The Great division is atop the instrument, where its ensemble can speak clearly into the space, perfect for congregational singing and times when the organ's sound should be dominant. Under the Great is the Swell division, encased in a position that is vertically centered in the room.  From this position, its more colorful tones can project through horizontal swell shades.  Under the Swell, is a small Choir division, also enclosed behind horizontal shades.  This is literally a "choir" division, designed specifically to accompany singers on the platform. The choir division is mostly behind the wooden case, but is able to speak out through openings above and behind the singers. This unique design by David Reynolds allows easy access to all the organ's mechanisms for service and to all the pipes for tuning.

A unique aspect of this new instrument is the Echo division, housed in a new organ chamber high in the rear of the room. This ten-rank division is practically an organ in itself, and features unique imitative voices reminiscent of early twentieth century American organs. The Echo division will contain several unusual vintage stops that were built by the Estey Organ Company under the supervision of William Haskell. These stops include a Labial Oboe, strings, and a very rare Cor Glorieux (Saxophone), one of Haskell's most beautiful and effective creations. These pipes were sought and carefully gathered in over a period of two years.

Also planned is the restoration of the facade pipes to their original stenciled designs. Over the years, they had been painted repeatedly - most recently gold. Working with a hand-colored photograph of the original organ, our craftspeople are carefully removing layer after layer of old paint to uncover both the original stencil designs and the original color palette (which is, to say the least, distinctive). The result is going to be spectacular both tonally and visually. The organ will be completed with a new 3 manual terraced drawknob console that will echo the original keydesk design of the organ.

Installation is slated to begin in the fall of 2019, and should be completed in early 2020, with a dedication program planned for the summer