Certainly, no musical instrument is as varied in style and concept as the pipe organ.

Across the centuries, fine instruments have been produced ranging from tiny portative organs that can be held on the player’s lap to hundred-ton behemoths. Today, organ builders are actively building in a variety of styles, many based on historical models.

Most pipe organ music is, to some extent, church music. The best pipe organs for most customers are those that support music in the church, especially congregational singing. Over the centuries, pipe organs have been as varied as the music written for them. Not all, though are suitable for the church. The Wurlitzer pipe organ, for instance, was a magnificently engineered product, but as the Wurlitzer company learned (to their disappointment), they weren’t really the sound of worship.

The one hundred years spanning the twentieth century – a relatively brief time period in the long history of the organ – was a time of enormous change. Organ builders, organists, and congregations were dealing with the application of more and more modern technologies to the instrument. These innovations included the following: electrically powered blowers, which enabled higher wind pressures; electric or electro-pneumatic action of keys, stops, and expression shutters; electrical derivation of several stops from a single rank of pipes; detached consoles, with pipes placed remotely in separate rooms (“chambers”); combination action to facilitate rapid stop changes; mass-production techniques for action components (not pipes); and finally, electronic signal transmission, memory systems, sequencers, transposers, and digitally reproduced sounds. All of these have had a direct or indirect effect on the tonal side of organ building.

In the tonal design of pipe organs, the twentieth century saw the development of two opposite extremes. Labels and generalizations can be misleading, but on the one hand were the advocates of “romantic” or “orchestral” organs, and on the other were the proponents of a return to “classical” or “baroque” tonal ideals. The romantic organ had a mellow tone quality, with stops mostly of 8′ (unison) pitch, and several stops imitative of orchestral instruments. The neo-baroque organ had a brighter, more transparent tone quality, striving for clarity in contrapuntal music, with many stops of higher pitches such as 4′, 2′, 1 1/3′, and mixtures. The “American classic organ” of the mid-twentieth century sought a middle road between these two extremes, incorporating the best features of both. It is fitting that the American Classic Organ, itself a melting pot of tonal elements of many historical periods and national styles – and yet still uniquely American – should be the instrumental voice of so many American congregations. 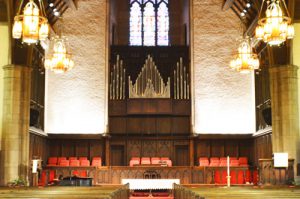 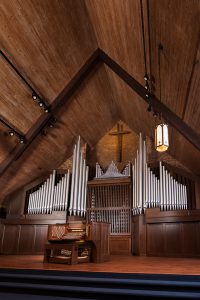 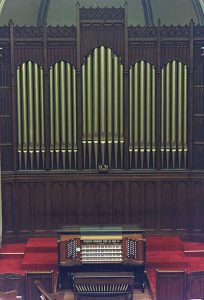 Today, as we enter a new century in the history of the American pipe organ, we have a renewed appreciation for many of the orchestral organ sounds of an earlier time. These are sounds that congregations cherish! When combined with a well-conceived ensemble architecture, the result can be stunning, even in smaller organs. We feel that this tonal approach, with its ability to play a wide ranging literature and its unique musical flexibility is the best solution for the worshipping needs of most American congregations.

We do not pretend to imitate or copy the work of any past builder. Rather, cognizant of their contributions, we have sought to develop a unique style, reflective of our own tastes, and the needs and tastes of our customers. We find, for instance, that we prefer a somewhat warmer Principal ensemble than such builders as Aeolian-Skinner provided, along with more assertive flutes and somewhat broader reed sounds. In designing or redesigning the tonal palette of any instrument, we approach each situation individually. The requirements of the worshipping congregation are paramount, and our organs are designed, first and foremost, to meet those needs. 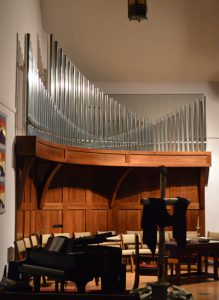 The tonal design of a pipe organ may perhaps be best compared to the architecture of a building. As with any well-constructed building, the towering tones of an organ require a musical foundation, a tonal framework to hold everything together, and the sound colors and decorative musical touches that make listening to the organ appealing and exciting.

Our Principal stops – especially at the foundational 8′ pitch, are generously scaled to provide an articulate sound that is also warm and embracing. These stops, of pure “organ tone”, define the sound of an organ, and are perhaps the most important component in the tonal structure. They are the “framework that holds everything together.” 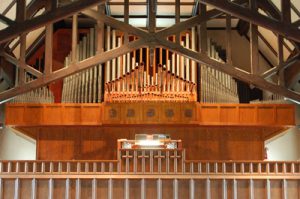 When designing an organ, we vary the scales of the Principal stops to allow them to provide a rich harmonic framework that is never brittle or harsh. Wherever possible, we prefer to include Principal stops at 8′ and 4′ pitches even in our secondary divisions, providing somewhat smaller scales for these divisions as necessary.

The flute stops are voiced to provide both warmth and articulation. In the Great divisions of smaller organs we prefer, wherever possible, to provide both open and stopped 8′ flutes, satisfying the need for an accompaniment or ensemble flute sonority, as well as a more powerful solo flute. Our organs usually include a Cornet combination (8′, 4′, 2 2/3′, 2′, and 1 3/5′ flutes) in the Swell or Choir division. The careful attention we give to the flute ensemble of an organ is reflective of its importance in both the performance of organ literature and in worship.

Strings are often neglected in modern organs, even though they are perhaps the sonorities that worshippers appreciate most. Our string stops are designed and voiced to give the organ a quiet grace, allowing the instrument to be as elegant when it whispers as when it roars. Our organs usually include string stops at the sub-unison (16′) level in both manual and pedal, allowing a quiet bass component that is transparent enough to not muddy the ensemble.

Reed ranks offer both solo color and fire. Where possible, we prefer to place the big chorus reeds in a division that is under expression, so their addition in a crescendo can be made gradually, and also so the organist can control how much fire the reeds should be adding.

We also recognize the importance of the solo reeds. These include such stops as the Clarinet, Oboe, and Rohr Schalmei. On large Romantic organs, even a fine French Horn can offer a stately presence! Properly conceived and voiced, these stops offer unique sounds to solo out a melody, and can also add interest and color to the ensemble. 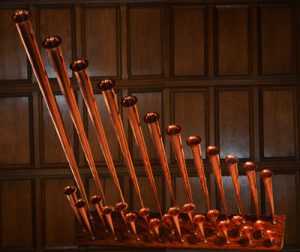 On large organs, we sometimes include a “glory reed”, which may be a horizontally mounted Trompette en Chamade or a powerful Tuba or Bombarde. These special stops are voiced to sing out over the entire organ for those special occasions when “heavy artillery” is called for.

The Pedal division of the organ deserves special mention, since it provides the foundational basement to the organ’s tonal structure. Often, in the smaller organs of some builders, the Pedal receives short shrift. It’s pipes, after all, are costly and also take up the most space. In our organs, we try to offer as much color in the Pedal division at the 16′ pitch as possible to allow the organist the ability to create the proper foundational sound for each situation. We also provide a full range of sonorities at the higher pitch levels, 8′, 4′, and mixtures, to reduce the constant need to couple the manuals to the pedal. Where possible, these stops should be independent ranks of pipes, although deriving them from the manual stops is often useful in smaller organs.

To learn more about the mechanical and tonal design of pipe organs, and to help unravel the terminology and jargon associated with the organ, request our publication “The Pipe Organ: A Crash Course.”