The Episcopal Church of the Ascension, Bardstown, KY

First, a personal note… If you have to work away from home, there are few better places to  do it than Bardstown, KY.

And, there are few nicer people to work with than Karl Lusk and David Pratt at the Episcopal Church of the Ascension.

When Dave Pratt first made contact with us, it was to inquire about repairing the control system on their small (9 ranks) pipe organ. The system had suffered at least three lightning strikes over the years, which Dave, an electrical engineer by trade, had worked to repair. Clearly, though, a more permanent solution was needed!

When we first visited the church, we found that Dave and Karl Lusk, the pastor, had done their homework. When we explained some of the problems with the existing installation, Karl told us, “I’m not and electronics expert, but I know what a giant capacitor is!” We talked about what this little organ could be, as well. Space and budget for large additions were not an option, but with some creative thought, we arrived at a new design that has turned what was built as a little practice organ into a capable and versatile church organ.

The Ascension organ got a full makeover. Pipes were rescaled, repurposed, and revoiced. Major portions of the windchest actions were replaced. The console was rebuilt with a new Peterson ICS4000 control system, new controls, and keyboards. And finally, we added a few digitally-generated stops to each division to provide greater variety. 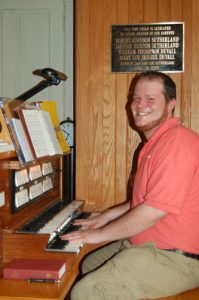 The organ had suffered from very serious wind stability problems. If the organist held a chord and then played a pedal, the pitch of the organ would sag. When the pedal was released, the pressure in the wind system would rebound. David Reynolds redesigned the system, replacing the reservoirs and working out an ingenious system that circulated the air in the system more efficiently, and completely eliminated the instability.

Previously, the organ was strictly a collection of principals and flutes, all of very narrow scales. It had been built in 1964 by Eugene Ward at St. Meinrad Archabbey in southern Indiana. Mr. Ward had built an ingenious little instrument, but he had built it as a small studio practice organ.

Because the scales were so narrow, the effect in the larger room was a bit thin and harsh. When it was installed later at Ascension, the wind pressures had probably been increased, which added to both the tonal problems and to the wind supply instability. 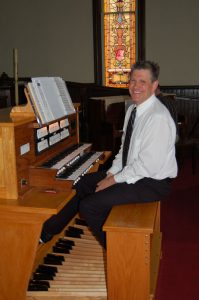 Martin Ellis at the Console

By broadening the pipe scales and increasing the cutup (the heights of the upper lips of the pipes) in the voicing studio, we were able to give the organ more warmth and body. To make the instrument more functional, and given space limitations, we added digital stops to provide strings (of which there were none before), and reeds. With very careful voicing of the digital sounds, we made them knit successfully with the pipes. Key to this process, of course, was knowing which stops work well digitally, and which do not. The flexibility of the integrated control system allowed us to custom-program the organ to take full advantage of both the pipe and digital stops. And, as icing on the cake, we added a set of tubular chimes to the organ.

Martin Ellis played the concert to rededicate the organ at Ascension Episcopal Church on Friday evening, May 20, 2010. His program, which included everything from the Bach “Jig” Fugue in G Major to William Walton’s ceremonial “Crown Imperial” would have tasked even a much larger organ. But organ and organist were both superb, playing for the standing-room only crowd, which included Eugene Ward, who had first built the organ forty-six years before . On Saturday, May 21, the church hosted a workshop for church organists conducted by the Martin Ellis, with help from Thad Reynolds of Reynolds Associates.

Since then, the Ascension organ has been heard in several concerts, and organist Hobie Humphrey says he has a new eagerness to practice and to explore new music. Karl Lusk and Dave Pratt are both enthusiastic about the difference their “re-imagined” organ has made in the quality and spirit of the church’s worship services.

Bardstown is the Bourbon Capital of the World, and rich in history and culture. It also has some of the best eateries around, including a terrific Bosnian restaurant just across the street from the church. Do, however, watch your speed when you’re driving downtown (but that’s another story)….