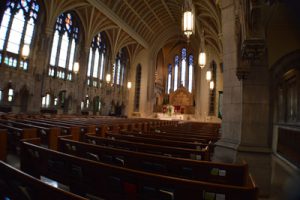 North United Methodist Church in Indianapolis has been a center of faith, culture, and art since it was built at the corner of 38th and Meridian Streets in 1931.

The imposing Gothic structure, with its towering sanctuary is a landmark in the city, and is also home to a thriving family of faith, serving the needs of the local neighborhood and the larger community.

When the building was under construction, the congregation contracted with the Kimball Organ Company for a large pipe organ. The contract was signed early in 1931, and the organ was completed in time for the national convention of the American Guild of Organists in July of that year.

The Kimball was built in the orchestral style that was typical of the time. Although the organ was blessed with pipes of large scale and wonderful color, it lacked the ensemble architecture that was needed for church services and for recital. 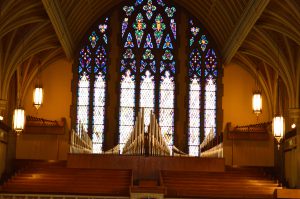 In 1965, the E.H. Holloway Corporation constructed an instrument in the gallery of the church that was the antithesis of the big Kimball in the chancel. Holloway’s organ, voiced by Ernest White, was built using smaller scales, low wind pressures, slider windchests, and no expression. While the organ served well for choral work and for a certain segment of the recital literature, its tonal problems were almost precisely the opposite of those in the chancel organ. Over the years, additions were made to the Kimball, including a four-manual console that could play both organs, and a few classic ensemble stops (including mixtures).

By the turn of the new century, both organs were in need of major renovation, stemming from a host of mechanical and electrical problems. At the same time, a plan was needed that would rectify most of the tonal deficiencies of each organ, and successfully integrate the sound of each with the other. The physical and technical challenges of this project were enormous. Age, as well as field repairs and revisions to the Kimball organ had left the mechanical and electrical systems in very tired condition. The control system was a network of electromechanical relays and offnote contacts that required as many as seven stages of action between the playing of a key and the sounding of the pipe. Access to the chancel organ for major repairs is especially difficult. Many of the screws that held the pressurized windchests and reservoirs together were stripped out, causing air leaks and interfering with the operation of the systems.

Rev. Robert Schilling, who had been Minister of Music and the Arts for over four decades, strongly felt that the organs at North should be preserved and renovated. He spearheaded the effort, and the details of the renovation project were worked out under his very capable and knowledgeable guidance. The preservation of one of the most magnificent instruments in the city was largely due to Bob Schilling’s foresight and influence. 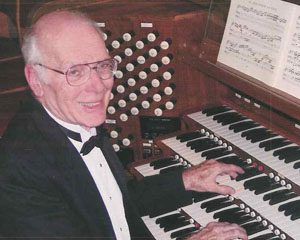 Rev. Robert Schilling at the console.

Working with Rev. Schilling, we immediately determined that all the excellent Kimball pipework should be preserved. The reed stops were completely renewed. The flue pipes were reconditioned and regulated for proper speech. Stops that had been added to the organ in more recent years were evaluated, and, in some cases, assigned to different functions more appropriate to their sound and construction.

Tonally, our approach to the Kimball organ was that, rather than trying to change the basic sound of a high Romantic organ, we should develop that sound, scaling and voicing pipes that were not original to the organ in a manner that would compliment rather than fight the instrument’s original sound.

We strongly felt that the very fine Kimball (Welte) pitman windchests should be preserved. These chests, with their fast, precise action, are perfect for the orchestral organ literature that was popular when the big Kimball was built. Improvements to the hardware in these chests solved many of the weather-related problems that had plagued the organ in recent years.

The gallery organ required a new tonal concept. The instrument lacked fundamental tone at 8’ in the manuals and at 16’ in the Pedal. The pipes were scaled and voiced in a manner that made the sound of the instrument top-heavy. Although this organ was suitable for the rather limited musical repertoire for which it was built, its tonal concept was not successful for the wider literature.

The budget for the project was, of necessity, heavily weighted toward the Kimball organ, which is the main instrument for worship and by far the larger and more complex instrument. This left a very small budget for the gallery organ. We were able to create an entirely new tonal concept for this instrument by rescaling, revoicing, and repurposing many of the existing pipes, keeping the expense of purchasing new pipework to the minimum necessary.

The Holloway organ also was in need of mechanical renovation, including improvements to the pallet and slider windchests, and a complete renovation of the winding system that included new reservoirs and wind conductors. 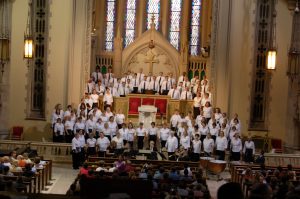 The National Pastoral Musicians at North.

We rebuilt both consoles, although additional renovation to the four-manual console had to wait for the next phase of the project. The project included a new Peterson ICS4000 integrated control system. From a control standpoint, the North organs are the equivalent of a single instrument of eight manuals. Peterson was able to provide custom software for this system that could handle the complex requirements of this large organ.

The completed organ was rededicated on April 13, 2004, with a service of dedication followed by a recital by Thomas Murray. A second recital by Ken Cowan was held on October 29, 2004. The instrument was also a featured venue for the 2007 national convention of the Organ Historical Society. For that event, Carol Williams, the civic organist of San Diego, gave an exciting concert.

Although these instruments presented a host of challenges, we are delighted with the results of our efforts. Comments from the organists that have played at North since then, from international concert artists to new students, have been gratifying.  Even more gratifying was the support the congregation gave to this huge project. The members of North Church provided very broadly-based financial support for the project, demonstrating the importance of great music to their worship experience, as well as their commitment to the future of their church. 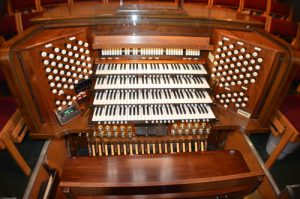 Ten years after overhauling the windchests and pipes, Reynolds Associates replaced the keyboards, along with the pedalboard, the expression shoes, and the coupler rail. After an additional decade of use, these parts were worn out, and Martin Ellis, organist at North, helped to design the improvements. Replacing the keyboards allowed us to better utilize many of the features of the Peterson ICS4000 control system, which controls all eight divisions of the 1931 Kimball/Reynolds organ in the chancel and the 1965 Holloway/Reynolds organ in the rear gallery. Several interesting custom features were also included in this project, including harmonic couplers for the Solo division, and a Sostenuto control.

The big organ at North is not the largest organ in Indianapolis, but it is certainly one of the finest and most beloved. Typical of the great orchestral pipe organs, The Patriarch is both subtle and commanding. Its elegant presence graces a beautiful Gothic sanctuary that is, itself, worth a visit to the church at 38th and Meridian Streets.

During the years since its rebuild, the organ has been played in hundreds of church services, as well as concerts by Thomas Murray, Ken Cowan, Carol Williams, Martin Ellis, and Robert Schilling. The organ has been featured in conventions of the American Guild or Organists, the Organ Historical Society, the National Association of Pastoral Musicians, and the dauntingly named Fellowship of United Methodists in Music and Worship Arts. Three national publishing houses have used the organ, with Ellis at the console, to record their annual demo compact disks of organ and choral music.

It is an honor to provide care for this remarkable work of art.