Trinity United Methodist Church in Huntington, Indiana is a downtown church in a small midwestern city. 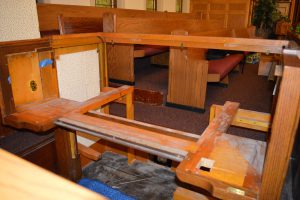 The console cabinet ready for rebuilding.

The organ had be built in 1958, and after serving the worship needs of the congregation for a half-century, it was in need of renovation. Particularly, the organ’s windchests, the mechanical heart of a pipe organ, needed to be releathered. The need for renovation had been hastened by a major construction project that had been required in the sanctuary.

One morning, a church member discovered that a small section of the vaulted plaster ceiling had fallen. Engineers were immediately called in to evaluate the situation, and what they found indicated a serious problem. The entire plaster ceiling had separated from the roof structure and was hanging by a thread.

Construction crews moved in, and the entire expanse of plaster was taken down and, in a project 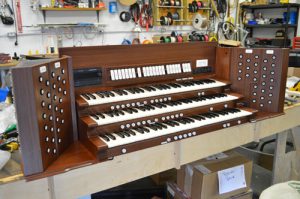 New console interior in our shop.

that took many months, replaced. We had been called in early in the process to cover the pipes and console to protect the organ from the dust, sand, and paint. Everything went well until the cleanup process began.

An over-zealous worker, just trying to do his job, removed the plastic covers from one of the windchests, and in the process, plaster dust and crumbs fell into the pipe holes. For the next two years, this debris found its way throughout the delicate actions causing many problems. It

became clear that the renovation project would need to go forward immediately.

When we proposed this work to the church, we  invited the congregation to re-imagine their church organ. We suggested that we renovate the console using a Peterson ICS4000 integrated control system. We also listened carefully to the sound of the organ, and suggested several changes to the voicing of the pipes. Some additional pipes were added, as were 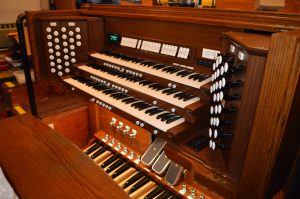 some digital color voices to add to the tonal palette of the instrument, with special emphasis on the string and reed stops, as well as a strengthening of the foundation tone of the organ. The decision to add digital voices to a pipe organ is a complex one, in which the added versatility of an expanded voice palette must be weighted against the use of a non-pipe tone generating system. In this case, the addition of these voices required a digital system because there was no additional room to add pipes.

When adding digital stops to a pipe organ, it is vital for the builder and the customer to understand that some digital sounds are acceptable, while others are not. At Trinity, we used the digital voice extension system to add string and flute color, as well as additional pedal stops, including a 16′ Trombone and 16′ string, both very useful sonorities, and both impossible to fit in the available space using pipes. 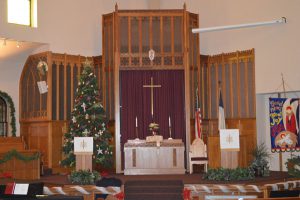 Organ case before the renovation project.

Norma Roth is Trinity’s enthusiastic and hard-working organist. Norma’s husband, Verl, contacted us and arranged to have a new Trumpet stop added to the organ as a surprise for his wife. This new set of reed pipes is located in the Great division of the organ on a new windchest.

The original installation at Trinity placed all the pipes behind a wooden screen. In the center of this screen was a large open space that was covered by a red velvet curtain. This curtain was directly in front of the pipes of the Great division, choking off the sound of the most important ensemble division in the organ. We proposed removing this drape and building a pipe facade using diapason pipes that had been inside the organ. 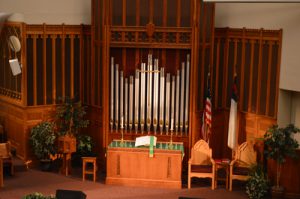 New facade after the project was completed.

This proposal was the hardest decision for the congregation to make. For many worshipers, the church is a very personal place, and changes can be hard to accept. We prepared a visual conception for them to consider, and, after much discussion, the change was approved. The result is a beautiful new facade behind the communion table and much better sound from the organ.

The congregation benefits from the useful features of a new ICS4000 control system in the organ, including a transposer, multiple combination memories, full MIDI interface, and record/playback function. Since the 3-manual console is now attached to the pipes by only one small cable, the console can be easily repositioned, if needed. This new system replaced the old mechanical relays and memory that had begun to fail.

Site-work on this project began December 26, 2012. Martin Ellis played a truly memorable concert at Trinity on October 4, 2013. The sanctuary was filled with enthusiastic church members and others from the community. Since then, the church has hosted several concerts, including one by Norma Roth. All have been well-attended. 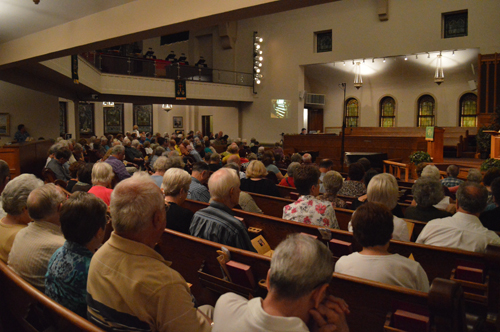