The city was in the grip of the worst blizzard anybody remembered – certainly the worst in a century. For three days, High Street United Methodist Church, a cavernous limestone building in the middle of the city known as “Middletown, USA,” had been empty and silent, shrouded in the snow and beaten by the wind.

Nobody was around to smell the gas that was slowly filling the building from a leak in the basement. At any other time or in any other circumstances, the disaster that was about to happen would have been averted, but this day, High Street’s great Gothic building was slowly turning into a bomb.

Maybe it was a spark from an electric motor. Perhaps it was a pilot light. Whatever it was that ignited the gas, the devastation was immediate. A lesser building, without High Street’s massive stone walls, would probably have simply ceased to exist. As it was, the overpressure of the explosion was enough to lift the roof completely off the building and set it back down again on the walls. Windows were blown out, doors demolished. 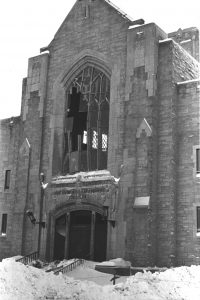 It all happened in a few seconds.

In the sanctuary, the damage to the congregation’s cherished pipe organ, E.M. Skinner’s Opus 803, was severe. The 4-manual console was nearly ruined, as were many of the pipes and mechanisms, especially in the Swell division. As soon as the building was deemed safe, work began removing the splintered and sodden parts of the instrument.

Almost immediately, the congregation picked itself up, resolving to restore both their building and their ministry. This required a leap of faith, since, at the time, they had no idea how much it would cost to save the building, nor even if it could be saved. Extensive engineering studies showed that, despite the heavy damage, the structure of the building was sound. The restoration that followed renewed the English Gothic magnificence of the building, while at the same time modernizing it for the future. The leap of faith paid off. During the months of rebuilding, the congregation actually grew in size, and the new mortgage was paid off only four years after the disaster. 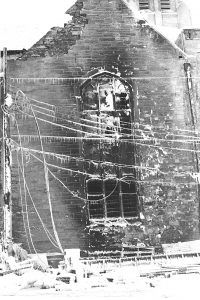 Along with saving the building, the congregation also resolved to save the Skinner organ, leading to perhaps the saddest chapter in this tragedy. A local individual with whom the congregation contracted to rebuild the organ apparently engaged in a bit of skullduggery, depleting the church’s funds for the project, and resulting in the loss of several ranks of Skinner pipes, which were probably sold and then reported as a loss. When he had finished his “work,” experts that examined the result reported that the instrument was not acceptable.

Finally, almost two years after the explosion, High Street contracted with the Indianapolis firm of Goulding and Wood to put the Skinner organ back into operation. By this time, funds were very limited. G & W did a workmanlike job of reassembling the organ, and attempted to revise the tonal design. Parts of the Skinner organ that had not been damaged were reconnected, but not rebuilt because of lack of funds. Many stop knobs, including those for about half the Pedal stops, did nothing, but represented “prepared” voices to hopefully be installed in the future.

The organ remained in this state for three decades. Organists struggled to avoid the important stops that were missing, and also to cope with an increasing frequency of mechanical failures as the original parts that had been installed in 1931 finally gave out.

When we assumed responsibility for the care of the organ in 2003, it was with the understanding that a new plan was needed for the instrument’s rehabilitation. The process of studying, preparing, submitting, and approving a workable plan took nearly five years, during which time the organ committee interviewed a number of organ companies and considered plans from each.

I had had a long experience with the High Street organ, going back to my college days at Ball State University. There, when I was an aptly-described sophomore, I had one day expounded (pompously, as I recall – pomposity is part of the sophomore experience, after all) to my organ teacher, Fred Binckes, about the obvious advantages of tracker action, low windpressures, unnicked pipes, etc., etc., all of which I had read about, but about which I really knew practically nothing. With a phone call to Jane Church, High Street’s wonderful music director, it was arranged for this young college student to spend a few practice sessions at the four-manual console of the great Skinner organ. While I missed a conventional ensemble (and still feel that this is a weakness of most of these instruments), the experience of warm flutes and diapasons, powerful, dark reeds, and the deep, rumbling fundamental sound of the Pedal (all three ranks), was an epiphany for which I remain grateful. 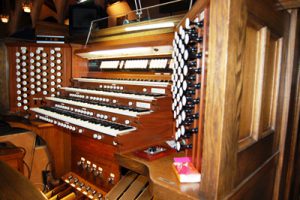 The four-manual console following the 2008 project

The High Street organ almost single-handedly brought me to an appreciation of the American Romantic organ, an appreciation that has held through the renovations of many Kimballs, Esteys, Möllers, and Kilgens. The ideals of the Romantic, including sweetness of tone, color, and warmth have also helped me as we have redesigned later organs that had ensemble, but lacked these essential tonal elements.

In January, 2009, thirty years to the week after the disaster that nearly destroyed High Street and its Skinner organ, the congregation signed a contract with Reynolds Associates to begin the renovation process. The project looked toward a finished product that would preserve all the existing Skinner pipework, but also include a more workable ensemble. 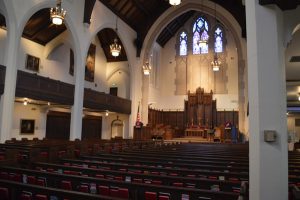 The Sanctuary at High Street

When the organ was built in 1930, Skinner had already begun his alliance with Englishman G. Donald Harrison. It was an alliance that would revolutionize the American organ, but would ultimately force Ernest Skinner out of the company he had started and that bore his name. Harrison eventually dubbed his new style of organ design, “The American Classic Organ.” In its best form, this design would essentially be a Romantic organ with a more classical ensemble structure. Over time, though, ensemble would win out over color, and for many years the pendulum would swing far to that direction. Many great organs like High Street (as well as the big Romantic organs at North United Methodist, Zion UCC, and Gobin Memorial Church) we either replaced with lesser instruments or “improved” to meet the ephemeral fashions of the day.

Now, as with all things, “what goes around comes around,” and high Romantic organs, such as the High Street instrument, are again cherished. Fortunately, during all those years, the High Street congregation did not know its great Skinner organ was out of fashion!

By the beginning of the new century, however, its solid, colorful sounds were very much back in style. With an added ensemble backbone, the big Skinner/Reynolds organ can now play almost any music. Its sound is truly magnificent!

It would have been impossible and probably unwise to attempt to “restore” Opus 803 to its original Skinner form. About 25% of the original ranks are now gone, and others have been repurposed in the organ. Still, much of the elegance of the original remains, and the thirty or so Skinner ranks remain the tonal heart of this instrument. Possibly, our tonal design would be more recognizable to Harrison than to Skinner. Each division now has a fully developed principal ensemble, scaled and voiced appropriately to the period. The Pedal division, instead of being just a bass presence has a more developed palette that allows the performance of a wider assortment of service music and organ literature.

The first part of the process included rebuilding many parts that had not seen daylight since 1931, as well as parts that were patched up in 1980 due to lack of funds. The tonal design of the Swell was improved, and the existing Great I division redesigned and revoiced to become a Positiv. New additions to the Pedal included a 16′ Ophecleide and a 16′ Violone (both venerable Hook & Hastings ranks), as well as a much-needed independent Pedal Principal. 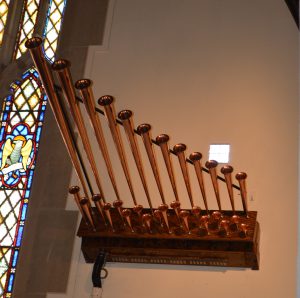 One part of the project of which I suspect Skinner would have approved (although nobody can be sure!) is the Peterson ICS4000 integrated control system, fitted into the existing Skinner console cabinet. This system offers  musicians a wealth of new possibilities as they manage services and recitals. Skinner was a tinkerer and inventor, and would likely have been intrigued by what is possible when modern technology is applied to the organ. (Anyone who is familiar with EMS might suspect that he would, of course, claim to have invented the ICS system, and would have followed up his claims with hotly-worded letters to the editors of the various organists’ journals!) (For more information about this system, which we use exclusively on all our projects, please visit, www.ics4000.com.)

The completion of the project in 2014-15 included substantial additions to the Choir and Pedal.

The Choir was perhaps the weakest part of the original Skinner design. While it contained three beautiful solo reed stops, an English Horn, a French Horn, and a Clarinet, it had no diapason stops to contribute to the organ’s ensemble sound, and, surprisingly, no strings except a 16′ Gamba that still bore marks of the 1978 explosion.

We removed the Harp, which was rarely used and in very poor condition, and replaced it with a second tier windchest.With the addition of four vintage string stops , diapasons, and a new 8′ Bourdon, we more than doubled the size of the Choir division. Additions to the Antiphonal division include a new Principal and Chimney Flute. 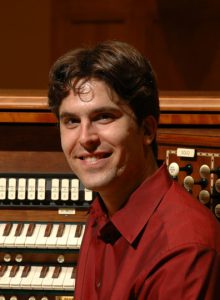 The crowning glory of the High Street organ is the new Trompette en Chamade. These highly polished copper pipes are mounted horizontally on either side of the beautiful stained glass window at the rear of the sanctuary.

The organ at High Street United Methodist Church has a unique story, from its design and installation by one of the organ world’s most prolific and irascible geniuses, through near-destruction, to a bright future in which its noble and elegant sound will continue to uplift and inspire. We are delighted to have had the opportunity to work with High Street United Methodist Church on this exciting project.

Raul Preito Ramirez, one of the world’s leading organists, played the rededication concert on the big High Street organ (increased from E.M. Sknner’s original 40 ranks to 70). This great instrument remains a treasure, heard every Sunday in worship.